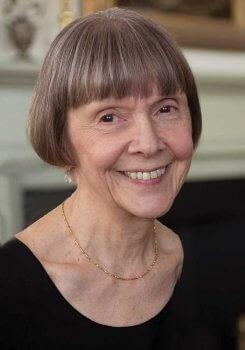 Susan Boardman began making her exquisite “embroidered narratives” while exploring the lives of ordinary and illustrious Nantucket women in their journals and letters in the archives of the Nantucket Historical Association. Through a familiarity with her subjects’ words, drawings, and artistic creations, she develops an intimacy with their lives that serves as the catalyst for her own designs.

Susan Ruckstuhl picked up a needle when she was five years old, and, with a little help from her mother, stitched her first piece of embroidery. After graduating from the University of Massachusetts, Amherst, in 1968, Susan became serious about needlework as a form of self expression. She enrolled in the Extension Course Home Study offered by the Nantucket School of Needlery, founded by Mary Ann Beinecke, after viewing an ad in the Boston Globe. She went on to earn a master’s degree in education with an emphasis in textile arts, and later took an Advanced Professional Study certificate at the American Institute of Textile Arts at Pine Manor College, where she also served on the faculty.

Susan first visited Nantucket in the summer of 1974, to participate in a “Nantucket Needlework Seminar” offered by Erica Wilson, an expert English embroiderer who was a graduate of the Royal School of Needlework and owner of a needlework shop on Madison Avenue in New York; Wilson’s Nantucket classes were cotaught by Edith Bouriez, an accomplished needlewoman who, like Wilson, had a summer home on the island. In 1989, the Boardmans purchased the historic Benjamin Barney Jr. house at 8 Ash Street, and spent two years carefully restoring it. Susan was now able to follow her muse to the island and settle here year-round.

Immersing herself in the community, Susan began volunteer work at the Nantucket Historical Association and served on the boards of the newly organized Nantucket Preservation Trust and the Nantucket Atheneum. While taking an art class at the Massachusetts College of Art, she contemplated other needle-art projects, all the while continuing an engrossing volunteer project at the NHA, reading and indexing the whaling journal kept by Susan Veeder, who accompanied her husband, Captain Charles Veeder, on a voyage in the Nauticon from 1848 to 1853. The journal’s charming, intricate watercolor scenes of ports and islands visited during her years at sea were the inspiration for Susan’s remarkable first embroidered narrative, “As Seen from Ship Nauticon,” completed in 1998.

Susan’s subsequent narratives have been scaled down in size, but are no less intricate and impressive; each one takes between two hundred and four hundred hours to complete. She continues to be inspired by the journals and letters of Nantucket women, and also by the historic architecture of the island and its natural bounty, palette, and light. Her designs reflect her fascination with medieval illuminated manuscripts, seventeenth-century English stumpwork, and the bird’s eye views of late-seventeenth-century Dutch engraver Johannes Kip. By her own admission compulsively industrious, she works forty to fifty hours a week in her home studio, where she sometimes has more than one piece in progress.