The exhibition Melville on Nantucket is structured around three themes:  Melville’s time on Nantucket, Moby-Dick and pop culture, and diversity onboard the Pequod.  Illustrated with objects from the NHA and private collections.

August 1, 2019, marks the 200th birthday of Herman Melville. In Moby-Dick, he celebrates Nantucket as “the great original” site of U.S. whaling; the island, in turn, has long celebrated its association with the famous novel. It may come as a surprise, then, to learn that Melville had never visited the island until the year after Moby-Dick was published. Instead, Melville found inspiration for the book in his own whaling experiences, the stories he heard among other sailors, and literature about whaling and Nantucket. In particular, the tragedy of the Nantucket whaleship Essex proved to have a profound impact on the climax of his great American novel. Yet Moby-Dick resonates far beyond the shores: it continues to shape the world’s imagination about the ocean, cross-cultural exchange, and human psychology.

In July 1852, the year after he published Moby-Dick, Melville sailed into Nantucket Harbor for the first time on the same packet steamer as Ishmael and Queequeg, characters in his novel. Few facts are known about Melville’s short stay. He accompanied his father-in-law, Judge Lemuel Shaw, who was on business. Shaw wrote of Melville, “I wish him to see some of the gents at New Bedford & Nantucket connected with whaling.” This likely included Shaw’s friend, the prominent Nantucketer Thomas Macy, who gave Melville a copy of his ancestor Obed Macy’s The History of Nantucket (1835), – and whose own house- right across the street – you are welcome to visit.

Among the other characters Melville met was George Pollard, captain of the Essex at the time of its demise. Melville later wrote, “I… saw Capt. Pollard on the island of Nantucket, and [exchanged] some words with him. To the islanders, he was a nobody — to me, the most impressive man, tho’ wholly unassuming even humble — that I ever encountered.” After the Essex disaster, Pollard lost a second ship, The Two Brothers.

Melville also “passed the evening with Mr. Mitchell the astronomer & his celebrated daughter, the discoverer of comets.” It is possible that Maria Mitchell, who became a professor of astronomy, was the inspiration for some of Melville’s later writings.

The Crew of the Pequod: Race and Diversity on Deck

Moby-Dick helps us understand how to live in a diverse and changing world with people very different from ourselves.

On the whaling ship Pequod, Ishmael works alongside a strikingly multiracial crew. Among the ship’s harpooneers, Queequeg hails from the Pacific Islands, Ahasuerus Daggoo from a coastal village in Africa, and Tashtego from the Aquinnah Wampanoag tribe at Gay Head in Martha’s Vineyard.

Ishmael learns lessons first from Queequeg, with whom he shares a bed at an overcrowded inn. Ishamael is at first frightened by Queequeg’s tattooed appearance and the tribal objects he carries around. He imagines that Queequeg might be a cannibal — a racist stereotype of South Pacific Islanders commonly held by white U.S. sailors. But Ishmael quickly comes to love his “bosom-friend” Queequeg.

The diverse fictional crew aboard the Pequod reflected the reality aboard U.S. whaling vessels, which were operated and overseen by officers and crew of many different races, ethnicities, and languages: immigrants from all over the world, especially from the Azores and Cape Verde Islands; African Americans, Africans; and Wampanoag and indigenous peoples from New England, the South Pacific, and other routine ports of call. Before the emancipation of enslaved people after the U.S. Civil War, the whaling industry was a place where people who escaped from slavery could find employment. Upon fleeing slavery, Frederick Douglass worked as a ship caulker in a shipyard. John Jacobs, brother to Harriet Jacobs (who wrote a famous slave narrative), shipped aboard a whaling voyage in hopes of raising funds to free his enslaved sister. Narratives by Frederick Douglass and Harriet Jacobs are now read alongside Moby-Dick as classics of American literature with important, though often unrecognized, ties to the whaling industry. 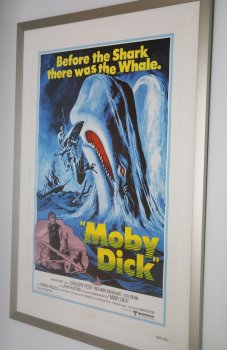 Moby-Dick was a flop when it was first published in 1851.  During Melville’s lifetime, the book earned little acclaim and even less money. But a new generation of readers rediscovered Moby-Dick in the early twentieth century, inspired by the madcap humor and mystical symbol-ism that made the novel seem modern before its time. Since then, Moby-Dick swims through popular culture, spawning adaptations in every imaginable medium. Moby-Dick, it seems, often inspires its readers to make their own art -from breathtaking visionary illustrations by Rockwell Kent; to the solemn 1956 film adaptation starring Gregory Peck as a stovepipe-hatted Ahab; to fantasy resettings of Melville’s novel on trains or space-ships; to raucous, all-night read-a-thons of the novel in museums and pubs around the world. Melville’s novel has also inspired countless researchers to uncover new works about whaling, like Nathaniel Philbrick’s popular In the Heart of the Sea, which in turn inspired the 2015 film. Moby-Dick also inspires pop culture in the every-day landscape throughout New England, especially here on Nantucket. Melville’s 1851 novel tells a dramatic sea tale, but, by all accounts, the Moby-Dick Inn and Cock-tail Lounge in Siasconset offered a rollicking good time.