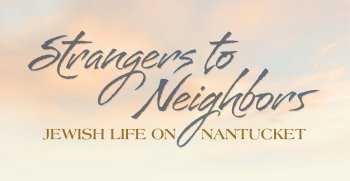 The Whitney Gallery, located at the NHA Research Library on Fair Street, featured  Strangers to Neighbors: Jewish Life on Nantucket in 2019. The exhibit marked a unique partnership between the Nantucket Historical Association and Congregation Shirat HaYam, which celebrated its 36th anniversary on Nantucket that year.

Strangers to Neighbors explored the history of the Congregation and the Jewish community’s commercial, religious, and educational life along with its efforts to support the larger Nantucket community. In so doing, the exhibit recognizes and celebrates the island’s varied population — a significant interest of both organizations.

From Strangers to Neighbors highlights the Jewish families who played a role in the island’s successful whaling industry, starting in the 1780s. It continues with the community’s slow, sustained growth through the early 1900s, the official formation of the Congregation in July 1983, and the succeeding 36 years to the present day.

Additionally, the exhibit highlighted specific individuals and describes how the Jewish people, though 30 miles out to sea without a religious organization of their own, were still able to overcome social barriers and gradually build homes, businesses, and spiritual lives on the island. The exhibit showed how the Jewish population has not only survived but contributed to, and flourished as a part of, the growing and vibrant life of Nantucket.

Explore more from the exhibition here