An integral component of the museum, the 1847 spermaceti candle factory has been carefully restored to reveal significant elements of the original factory, including the two-story lever press—the only original whale-oil lever press still in place in the world—and the foundation of the oil-processing tryworks. 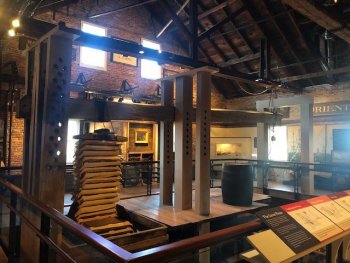 NEW in 2021!  Although a simple machine, the lever press can be hard to imagine in action, since several vital components are missing. To improve the interpretation, historian Mark Foster and master woodworker Ben Moore designed and constructed the missing post and beams, which are now installed and on display!

The candle factory was built by the Mitchell family immediately following Nantucket’s Great Fire in 1846 and close to the end of the island’s whaling era. Less than two years later, island businessmen William Hadwen and Nathaniel Barney purchased the manufactory and continued to operate it as a candleworks until the end of profitable whaling in the 1860s. The structure served as a warehouse until its conversion into the offices of the New England Steamship Company in the 1870s. The NHA purchased the building in 1929 and in 1930, it became the home of the first Nantucket Whaling Museum. 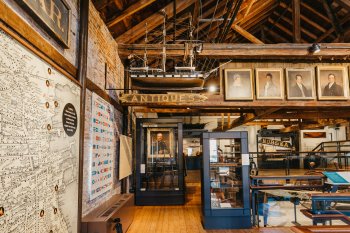 Throughout the candle factory are exhibits illustrating Nantucket’s historic waterfront industries. These displays include objects and artifacts related to boat building, coopering or barrel making, blacksmithing, ropemaking, and candlemaking, industries that supported the whaling industry and shared the resulting prosperity.

Lining the factory walls are original trade signs from Nantucket businesses, some still here and some long forgotten, from the 19th and 20th centuries. 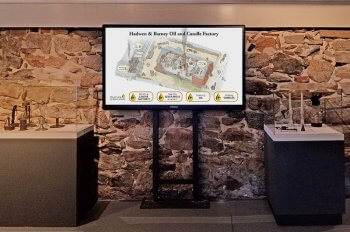 The Hadwen & Barney exhibition also features an interactive overview of the candle factory as it functioned in its heyday. Touch-selectable videos show exactly how the lever press worked through an animation of the oil lever press in operation,  how the candle factory supported seasonal oil refining, and how lucratively-profitable candles were made from the dregs of the oil refining.

Along the east wall,  the “dollars & scents” table offers a different way to experience the past, through scents typical of a factory and town in the whaling era.