“I hate museums’”, said Henry David Thoreau.  “They are catacombs of Nature’”.   With all due deference to the great philosopher, Neptune’s Grotto, our new display at the Whaling Museum, hopes to prove him all wrong.

Nantucket has always gathered flotsam and jetsam.  As its ships and people have gone out into the world, so the world has come back here.  Neptune’s Grotto is a magical collection of objects united by the fact that they have found a home in this museum, on this island.  To me, they echo the adventure of Herman Melville’s Moby-Dick, laden with a diverse crew of people, new places and old gods, strange creatures, and surreal contradictions – just like Nantucket.  Melville – who celebrates his 200th birthday this year – called himself a “library cormorant.”  He dove from one collection to the other, determined to investigate the world above and below the “ocean’s skin.” 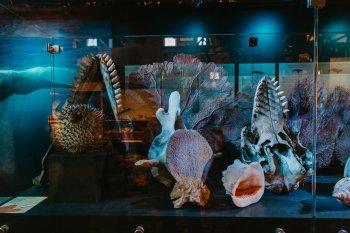 Like Melville, Neptune’s Grotto aspires to that eclectic spirit.  Like the seventeenth and eighteenth century cabinet of curiosities or wunderkammer, the forerunners of the modern museum, its specimens have no labels: they invite you to invent your own stories.  Did they arrive here in a whaling captain’s trunk, or were they stolen by pirates, bought in a remote bazaar, bartered for a scrimshawed whale’s tooth, or swapped for a tot of rum?  Or did they just wash in on a big spring tide?

In Moby-Dick, Melville wrote like a wild curator set loose in storerooms of whales and whaling history.  His book begins with a wild Google search of whale references from Genesis to his present day and proceeds to lay out philosophical, often crazy, attempts to examine the true nature of the whale and the vast sea in which it swims.  The great miracle of Moby-Dick is what it manages to squeeze between two covers.  But it is also a fantastic liberation of images and ideas.

Melville reached back to a time before science, before we ordered and defined the natural world and human beings.  In many ways, that ordering has been disastrous.  In his chapter “Cetology,” Melville satirizes our desire to catalog nature, inventing all manner of playful names and habits for the species of whales.  But his games speak to a deeper mystery.  We now “know” that there are 85 species of cetacean, yet we still understand very little about them.  Even the best handbooks conclude that the information on the many whales is “data deficient.”  Some species of beaked whale have yet to be seen alive at sea. 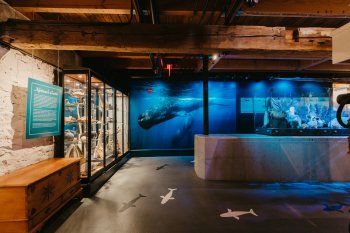 How do we explain whales then, in the second decade of the twenty-first century?  Are they the alien creatures of haunting song – the sound that saved them when it was first recorded in the 1960s, giving a lyrical voice to animals that had been regarded as dumb?  Or are they merely scientific puzzles waiting to be solved?  Where do we humans sit in that narrative?  Do we hold dominion over the sea, doing what we like, or can we still react to its poetry, its profundity and its soul?

Nantucket, this fragile island that might not be a part of America at all (just as Melville described it without ever having been here) is uniquely placed to hear  these stories.  Here the whale has shifted shape: from passive use by indigenous people to economic exploitation to emblem of ecological threat.  Just as dinosaurs have now acquired feathers, so the whale has changed in step with our culture and science.  Once a fearful monster, then a bountiful resource, now its fate lies in our hands.  Indeed, it is the only animal other than ourselves whose evolution has been affected by culture, rather than mere instinct.

How do we deal with these mysteries and realities?  By telling our own stories.  Neptune’s Grotto is full of them.   A tiny turtle swims in a bubble of water in a glass paperweight to hold the attention of a nineteenth-century child posing for a daguerreotype.  Decoy wading birds mimic their living counterparts to lure them to their doom.  A tusked walrus skull from the frozen North resembles a fossil of the legendary cyclops.  A massive whale’s jaw, impossibly contorted, proves its owner’s ability to survive and feed.  These are all overseen by Andrew Sutton’s giant underwater photograph of sperm whales, whales with which I have swum: owners of the biggest brains on the planet, taking us down into the deep and telling their own stories as they go.

What do they add up to, these signs and wonders?  One thing is sure: they are all haunted by the grand hooded phantom of the whale and this island, still surrounded by animals.  The North Atlantic right whales and the humpback whales that swim past its shores in spring and summer; the snowy owls that guard its tundra-like sands in winter; the seals that haul out on its remote beaches.  Scott Leonard of Marine Mammal Alliance Nantucket took me out to Great Point one freezing morning.  We crawled through the compass grass to spy on the pinnipeds and their fluffy white calves as they sang their own eerie song.

Our new story is conservation and protection, of the past and the present, for the future.  Here on Nantucket, this new – old place, the whale swims through its history and our own, as unknowable and mysterious as these objects we have collected.  Neptune’s Grotto is our birthday present to Herman.  I imagine his shelves filled with these same things, trawled on his own voyaging.  And if at the end of his journey he had to conclude of the whale, “I know him not, and never will,” then these random objects also speak of our curious search for the meaning of things – even though we may never understand them.