Nantucket Harbor and the Nantucket Bar

The curving shoal that stretches across the mouth of Nantucket Harbor has been known for centuries as the Nantucket Bar.  The sandbanks that make up this natural barrier to Nantucket’s Great Harbor allow a maximum depth of only nine feet at high tide.  Nantucket Bar proved a constant challenge to the mariners navigating its shallow waters. 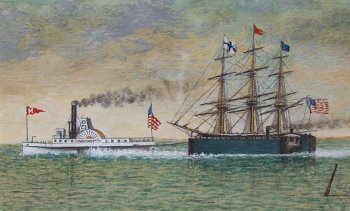 The “Camels” shown here were introduced by Peter Ewer in 1842 , as a floating dry dock that buoyed heavily laden whaleships across the bar, pulled by the steamboats of the fleet.

In the 1880s, the federal government constructed the present jetties of riprap granite to keep a clear channel for all maritime traffic.

Nantucket’s lighthouses provided mariners with guiding beacons to help navigate the island’s often treacherous surrounding waters, in which hundreds of vessels had foundered during the course of maritime history.  The shallow waters around Nantucket are home to such deadly shoals as the Rose and Crown, Great Rip, the Old Man, and Bass Rip.

Nantucket’s wharves were the heart of the island’s livelihood during the whaling period and beyond. The evolution of the wharves tells the story of Nantucket’s connection to the local world of the mainland, and to the distant lands that Nantucketers were discovering at the far reaches of the globe. 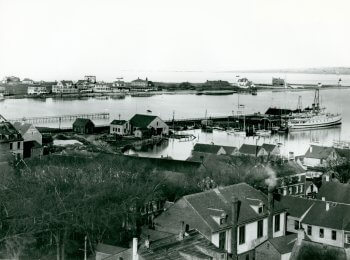 Steamboat Wharf, formerly New North Wharf, was visited by the steamer daily.  From 1881 to 1918, the Nantucket Railroad ran from the wharf to stations out of town.