“Look sharp, all of ye! There are whales here-abouts!”
Herman Melville, Moby Dick

Gosnell Hall explores all aspects of the demanding and dangerous trade of 18th century whaling. 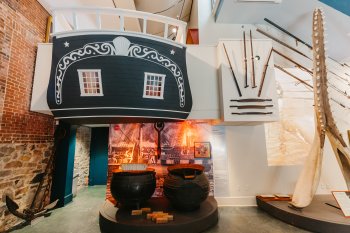 Diving from the ceiling—mouth open, teeth menacing—is the skeleton of a 46-foot male sperm whale, perhaps the most dramatic installation of a whale skeleton ever displayed.  The beauty and wonder of being this close to the skeleton is breathtaking, in the words of many of our visitors.

The whale died on a Siasconset beach on Nantucket on January 1, 1998 after floundering for two days in the surf off the island’s eastern end. A heartbroken community watched as it beached for the last time on Low Beach.

It is especially appropriate for visitors to Nantucket’s Whaling Museum to see a sperm whale. As Niles Parker, former NHA Robyn and John Davis Curator has said, “this is the whale that put Nantucket on the map. During the height of Nantucket’s whaling era, men left the island in droves to hunt the sperm whale. It is because of this whale that the island enjoyed the reputation of being one of the most prosperous ports in America during the late eighteenth and early nineteenth centuries.” 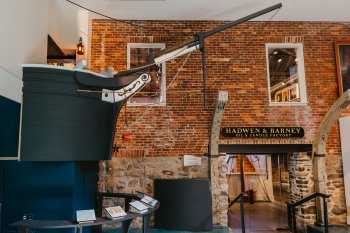 Anchored beneath the dramatic whale skeleton the diminutive 28-foot whaleboat evinces the dangers of hunting the largest creatures on earth.  Ours is a whaling-era boat, built in the late 19th-century in New Bedford.  Whaleboats were built to be light, fast and maneuverable.  The boat is equipped for efficient sailing, with a tabernacle to raise a mast and a centerboard. The boat also contains the equipment typically carried in American whaleboats, with tubs of coiled line, harpoons, lances, piggin (bailing bucket), drogue, and a hatchet to cut the line if the whale sounds deeper than the line can go.